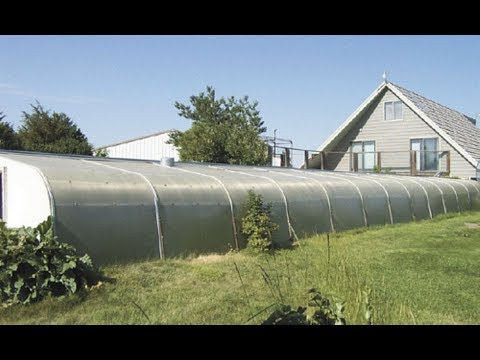 Growing lemons and oranges in Nebraska? Impossible, would be the first word most people would think of, but not Russell Finch. He bills himself as the largest citrus grower in all of Nebraska. Besides citrus he also grows pears, avocados, figs, roses, yucca, agave, hibiscus, and hundreds of other types of flowers, fruits, vegetables, trees and plants. His secret? A home-built “underground” greenhouse.

Finch first developed an interest in using earth heat in 1979, when he was planning the heating system for a new house. He wanted to use a heat pump as the only source of heating and cooling, but was told it would have to be supplemented with electric heat during the coldest days in winter. Knowing that the temperature is stable at 52 to 57 degrees F at 8 to 10 ft. below ground, he reasoned that if he could extract air at that temperature the heat pump would function as if it were in a southern climate. Russell contacted scientists at the University of Nebraska to evaluate his idea but was told it wasn’t feasible.

Ignoring what he had been told, he pressed on. Next, he phoned the heating division of the Coleman Company in Kansas. After speaking with one of their engineers, who encouraged him to pursue his idea and agreed it could work, he was furnished with a heat pump at dealer cost. It was installed and has been functioning as predicted for over 22 years.

The underground-heated air is blown into the greenhouse before it’s channeled to a room that houses the heat pump. Then the air is pushed out again by the blower to the underground tubes. An additional tube heats and cools the garage area.

The greenhouse is buried 5 ft. below ground and has an overall height of 14 ft. The trees inside are not in pots but actually planted in the ground.

Nebraska winters average low temperatures of 10 degrees. Typically, 20 days per year are below zero. The temperature in the greenhouse, even during the coldest weather, has never fallen below 35 degrees even when the outside temperature has plummeted to minus 40 degrees. Plant loss due to frost is zero.

In a region where homeowners frequently spend over $200 per month to heat their homes, Russel estimates that it costs about $450 per year to keep air circulating in the greenhouse and to keep the plants watered. His total energy costs per year, including a substantial amount of energy used to water over an acre of grass, plants and trees surrounding the home, is about $2,400. The size of the house is over 5,500 sq. ft.

To be able to grow both heat-loving plants and plants that need cold weather to go into dormancy, he had to divide the greenhouse into a tropical section and a cold weather section. By diverting the heating pipes to the tropical room, and opening a door at one end of the cold room, he was able to drop the temperatures enough to force dormancy.

The greenhouse measures 80 ft. long by 16 ft. wide. Finch says the only thing he would change about his design is to use a metal frame instead of wood for the greenhouse, even though the redwood frame has held up for over 20 years.

The benefits have far outweighed the costs to build the system. “Our cost for the greenhouse was around $7,500 for the material and excavation work,” says Finch. “I did all of the building and only needed help from my wife handing me the 6 by 12-ft. Lexan panels. Included in the cost was lumber, 6-in. tubing, Lexan panels, foam insulation, metal roofing, the blower motor, electric wiring, and other miscellaneous parts. These are 1992 prices so the cost could be higher now.”

For a FREE issue of Farm Show Magazine, goto: https://www.farmshow.com/subscription_new_direct.php

Check out our Store! https://www.farmshow.com/books.php 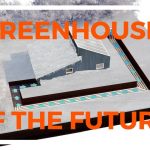