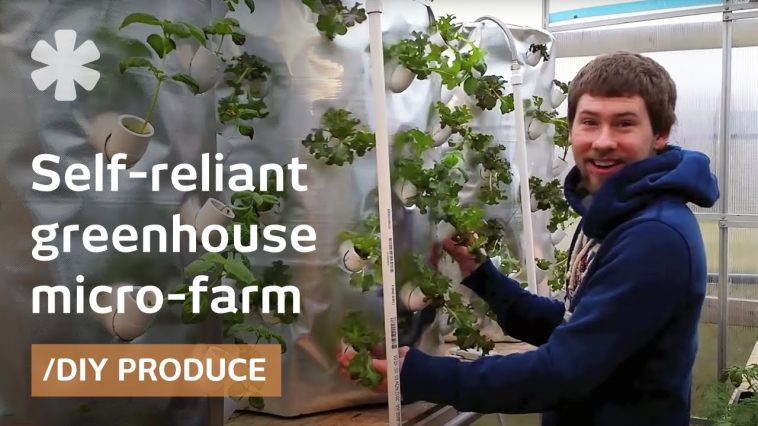 Benjamin Staffeldt grew up on a farm and works in a garden center so when he and his wife Sara moved into a rental home (a duplex), it was only natural he’d want to start farming his (shared) backyard. They began with containers and then bought a kit greenhouse to extend the growing season and were selling to local supermarkets and restaurants, but the heating bills to farm during Wisconsin winters (with temperatures as low as -70°F) was cutting sharply into their profits.

They knew they had to maximize greenhouse space so they decided to grow vertical and to grow differently. They experimented with hydroponics and finally settled on aeroponics. “So aeroponics is similar to hydroponics using water rather than soil, but it’s mist,” explains Benjamin. “It’s a mist that comes on inside the growing chamber, and it comes on every 3 minutes for 10 seconds, it’s a really high oxygen water that’s hitting that root. The method was actually developed and is being used by NASA because it uses so much less water and the speed of growth is much faster.”

To fully customize the growing experience, they added a thermal wrap to their aeroponics towers which helps refract light to help keep the temperature stable within the grow chambers. They’re now growing enough in their 10′ by 12′ greenhouse for farming to be Sara’s full-time job.

They’re hoping to commercialize their hybrid system- what they call Art Garden. It’s geared toward those looking to grow in a cold climate and in a small space (one unit fits into 4 square feet). This is all part of an increasingly customized growing world that Ben hopes might make farmers out of more of us. 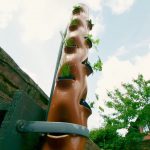